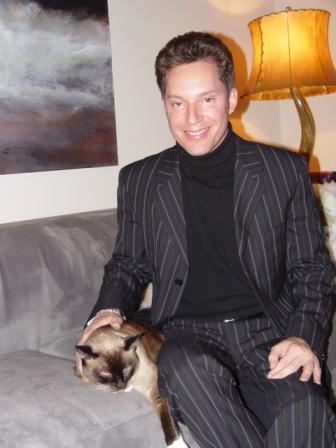 "OK....So who is Christopher Barson?"

Recently, while interviewing web designers, I was asked "So, who's your competition?" I simply answered: "I have no competition ..." The web designer scoffed and he was

eventually thrown out of my loft...but my answer was correct.

There is no Competition for Christopher Barson Interior Associates because our clients get whatever they need and want...within their budget !

My career started in the field of kitchen and bath design, way back in August of 1987.

I worked at a modest Kitchen and Bath contracting firm in Arlington, Virginia, for a wonderful, fatherly and stern man. Under his tutelage, I became his number one designer and sales person and project-coordinator within four months. I quickly accumulated a client following.

Two years later, I went solo and expanded my design services to include  master bedroom suites.

Clients also commissioned me to design their dining rooms to blend with their kitchens; their living rooms to blend with their dining rooms. Eventually, renovating and decorating DC's finest properties became the norm. In 2000, I'd achieved the "Top One Hundred" status at The Washington Design Center and released my first publication: Robert Allen Fabrics chose 10 United States Interior Designers to showcase their fabrics in a brochure which was sent out all over the world. Two of my designs were chosen and used as the centerfold for that publication. The World of full interior design and renovation services became my passion.

In 2001, a painful experience triggered a life change and I cleaned house. My antiques, oriental rugs, period paintings and artwork  were sold or given away. I moved into a chic and hip uptown loft which I adorned with new cutting-edge modern furniture from all over the globe...a transformation brewed.

When the building manager of my personal residence saw my newly furnished loft, he informed the building's developer -PN Hoffman- that he'd discovered a damn good designer to decorate their properties. With no formal introduction, PN Hoffman hired me to decorate the model unit in their premier property, "The Desoto;" located blocks away from The White House.

My design choices for that project were against the norm...the scheme was sparce and fiercely modern yet softened with deep rich tones, traditional accessories, a faux fur throw and a period sculpture. The fresh and inspired look pleased PN Hoffman as well as the design community. Within months, I was decorating DC's hottest lofts for important deep-pocketed people and soon became regarded as the "Loft King" of Washington, DC. I wound up decorating entire buildings for PN Hoffman including -eventually-Washington, DC's first official "green" building which was featured on CNN.

Work consumed me. My residential client base flourished; my work was getting more polished. My clients allowed me more freedom within their project schemes. I had finally become, The Decorator.
Suddenly, a flurry of incredible events occurred:

Interior Design is my passion. Please look at my work and you'll notice that each project is wildly different. Each one of my clients is wildly different. My company can tackle any design project and produce stellar work. I am currently working in Northern Virginia and Washington, DC.